A past version of my company website featured a page of favourite links, one of which led to Wikipedia. I spruced up each link with a wee favicon: the little 16x16 pixel logo that appears in the browser's address bar. Wikipedia's logo is the letter W:

The links page was eventually retired, but I noticed that the Wikipedia icon file, wikipedia_icon.png, was still very popular. The webserver's log files showed that it was being requested dozens of times per day, often by web surfers in tea-sipping China. The logs also revealed that the referring page -- the one displaying the W -- belonged to a web-hosting-slash-search site named Mixcat Interactive, apparently headquartered in orange-juicing Florida.

Sure enough, the search results page on their site was using "my" icon file (it's actually the intellectual property of Wikipedia, but the file sat on my server) for any result linking to Wikipedia: 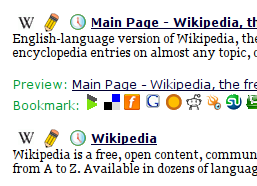 So, since I wasn't even using the icon file on my site anymore, I reckoned I would simply replace it with my company logo 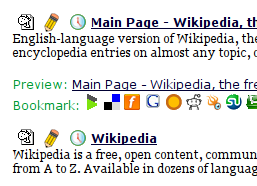 I figured one of those orange-juicers would eventually spot my little sock puppet and make the appropriate Fixcat.

Six months later, the sock puppet was more popular than ever. Over the past two days, I counted 431 requests for the cute little guy. At a couple of hundred bytes per request, that doesn't amount to much bandwidth, but it does clog the logs.

Maybe an ever-so-subtle change to wikipedia_icon.png would get their attention: 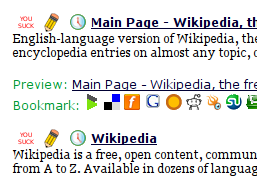 Feel free to verify whether or not Suxcat Interactive has finally managed to correct the problem.

The moral of the story is that, while it's very easy to use an image from another site to dress up your own web page -- and possibly desirable from a fair-dealing copyright perspective -- the originating site retains control of the content of that image.

Looks like Mixcat finally got the message and removed the icon reference. But another dubious search site has taken up the banner in the interim. Fortunately, it seems far less popular than Mixcat, leaving my logs relatively unclogged.