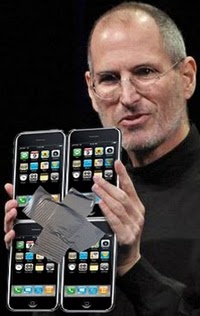 I'm not likely to have an iPad anytime soon. I haven't even laid eyes on an iPhone yet. But I have the sneaking suspicion that iPads and other ersatzPads will be a hit with casual internet users.

Notice I didn't say "computer users": no one wants to use a computer -- people just want to do internet stuff. The Start bar and caps lock and Are You Sure? popups can all go to hell. The iPad-style interface, as limited as it is, has simplicity working for it. Technology geeks generally don't appreciate simplicity, but my mom does.

There's the argument for the iPad right there: no more calls from back home asking about missing files and uninstalled device drivers. Sign me up.

But I suppose I should at least wait until someone invents an iTriangle to rest the thing on. Oh wait, someone already did.