While true, there are at least two caveats that must be observed of my bold statement:

Whoops! Looks like the spotting scope is mounted crooked again.

To my way of thinking, there are two things wrong with social networking as it exists today:

Facebook is the exemplar of the first point. Much has been made of Facebook's recent changes to their privacy policy, as well as the -- seemingly intentional -- complexity of the site's privacy settings. The more personal information that Facebook can expose, the more it can be exploited for advertising profit. To counter this exploitation, tools to monitor and restrict Facebook's myriad settings have appeared, and Quit Facebook Day has been organized for the 31st of the month.

I haven't seen my second point discussed, but it goes something like this: if I tweet a couple of somethings, write something on a friend's wall, discuss something in a blog comment, post a picture of me doing something, or send an e-mail with something in the subject line, there's no way to tie all of those together, even if they all share the same something. Instead of forming my complete opinion on the topic of this something, the fragmented ideas are segregated: into Twitter, Facebook, Wordpress, Flickr, and Google Mail, respectively.

A diagram of the current state of the social network, like the following, would look much, much better if designed by professionals. 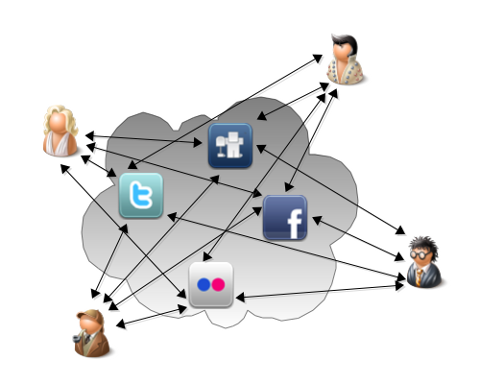 Marilyn and Elvis popped pills, and Sherlock shot up regularly, so what was Harry's vice? Bertie Bott's peyote-flavour beans?

For something called a social network, the people don't actually socialize directly with each other, and the intermediaries have far too much control over the method and content of the social interactions.

As a solution to the problem, I predict the following:

The future social network is one in which everyone hosts all of their own information themselves, uses external services merely as aggregating proxies, and is bound together by an open networking protocol, in the spirit of HTTP.

Try as I might, I couldn't seem to make that any simpler. So here it is again:

So the -- unprofessionally executed -- diagram of the future state of the social network now appears thus: 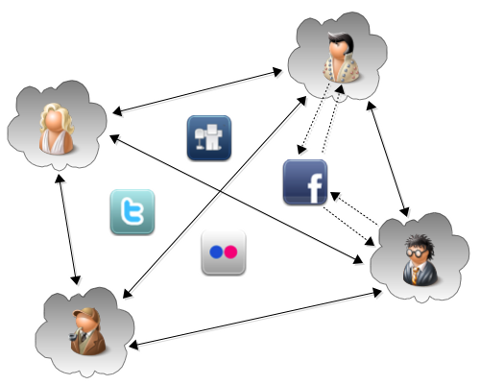 Just imagine that ring of retweets.

The people are all directly connected, but the familiar and easy-to-use (‽) services still play a role in making and maintaining the social interactions. In the example above, Elvis is writing on Harry's wall. Facebook makes the connection and provides the interface for typing on someone's wall, but the content of Elvis's posting is hosted by Elvis, and completely under his control. If the message is sensitive, and intended only for Harry, Elvis can forbid access to it from anyone else. Because Facebook does not store the posting, Elvis may also revoke it at any time. Because Elvis stores all of his own content, he may also combine it together in any way that he sees fit.

I have blithely skated past many implementation details, but there are nevertheless at least two projects underway to implement my (ahem) prediction: Diaspora and OneSocialWeb. The former collected a barrowful of cash donations following Facebook's latest privacy indiscretion, but the latter is further along in development and employs just the sort of open social protocol I had hoped for: XMPP.

Facebook and the others won't willingly surrender their control, but the short history of the web already tells many stories of users hopscotching past intransigent services and companies. I predict the same in this instance.