A couple of years ago, I complained at length about the state of the art in alarm clock radios. Doing so doesn't seem to have spurred anyone to invent a better one, but it recently occurred to me that, instead of conceiving a new device from the ground up, one could simply invoke last year's omnipresent tagline -- "there's an app for that!" -- and be done with it.

Apple doesn't seem to allow you to search the App Store without owning one of their precious whatnots (Google's Android isn't any better), but I eventually discovered a site that unveils the complete list of iPhone and iPad apps. Sadly, the clock-related apps that I found strive merely to replicate the form and function of yesteryear's nightstand specials. Let's review the shortcomings of those models:

By itself, the smartphone platform is able to address complaints #1 and #7 with network time protocols and onboard batteries. The apps can in turn handle numbers #2 and #3 through audio files or radio streaming easily enough, and some feature ingenious solutions for #4: swiping and shaking motions for scheduling and extinguishing alarms. All of the apps are intent on reproducing problems #5 and #6 though. The upshot is that the current stable of clock apps are, at best, marginally superior to the Groundhog Day flippers.

What I'm looking for is something way beyond that. Here's a not-an-artist's rendition of my dream (pun!) alarm clock: 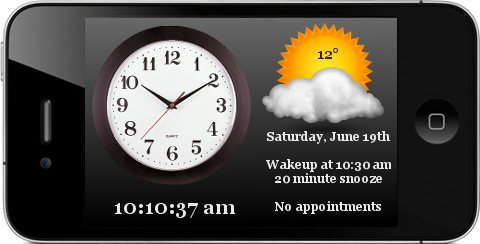 You too can enjoy the ultimate alarm clock experience for the low, low introductory price of just $749, plus shipping and fondling.

Ain't she a peach? I'm sure an interface wiz could do much better, but at a minimum, here's what I'd expect from such a wondrous creation:

From what I understand, virtually all of that can be accomplished with today's technology. Packing in too many features is a problem in itself, but given the cost of these smartphones, why not exploit them as as much as possible for the third of your life that you're unconscious?

Putting all of that together is something I could do, but someone else could do it better. If you can pull it off, I'll even promise to buy my first smartphone just to run your app.