There are many things that can occupy one's mind while trying to change a screeching baby's wet diaper in the middle of the night. For me, high-school math is as likely a subject as any. 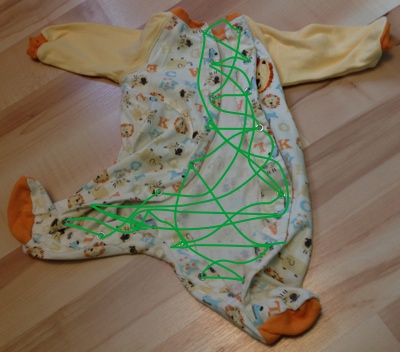 A vanishingly-small selection of the many distinct ways to snap up this @%$*! garment.

And, faced with our baby's many footie sleepers that I can never button correctly the first, second, or fifth time, I naturally began to wonder how many wrong ways I could possibly snap the thing together.

It's a simple calculation. There are twelve pairs of snaps on this particular sleeper. Choosing any single one to start with, it will have twelve possible mates. Once that one's snapped, the next has just eleven possible pairings, and so on until only one empty snap remains. The number of possible permutations is therefore 12 × 11 × ... × 1, which is usually written just 12!, or if you want to get probabilistic-ey with it: P(12,12). Any way you figure it, that comes out to just shy of 480 million different ways. Find me a sleeper with 14 snaps and I'll show you, eventually, 87 billion different ways to close it up.

Now, the nit-pickers amongst you will argue that many of those permutations should be discarded because neighbouring male snaps usually--but not always, as I've discovered--match neighbouring female snaps, or that the sleeper isn't made of infinitely-stretchy material. To those, I offer my rebuttal: thbpbpthpt!

I'll also suggest that most of your typical classroom math problems aren't applied to yowling month-old babies with arms and legs pumping every which way at indecent hours of the night.