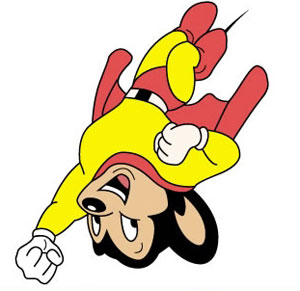 After fifteen years in the computer industry, I am used to this -- proudly delivered -- declaration: "Oh, I don't know anything about computers." Immediately following, this computationally illiterate individual proceeds to show me seven different things I never knew a computer could do.

And then there are people like George (name changed due to my forgetting what it was originally -- it might've even been "George") who show me something I didn't know humans could do.

At the time, I was working as a programmer in the Information Technology department of a Bay Street investment house, and every so often I would be asked by one of the computer system users to watch them demonstrate a bug in the program, or a new feature they'd like to have implemented.

George was new to the company, also seemingly new to computers, and asked me to witness some problem he was having with the system. I elevatored up to meet him, and he began his demonstration, as users invariably do, by showing me how he normally launches the program, logs in, and navigates to the screen causing the problem.

Usually, this part of the demonstration is very tedious: I know how to launch the program, log in, and navigate to the screen -- had done it a thousand times myself. But then I noticed something quite unusual.

George was holding the mouse upside-down.

I watched as George clicked screen menus and buttons using his thumb. Awkward doesn't begin to describe how one must contort to thumb-click the mouse's right button when it is positioned under the left side of your right hand's palm. Even describing it is awkward.

More astounding was that George was moving the mouse in exactly the opposite direction from what you'd expect. To move the mouse pointer up, his hand shifted down; to move the pointer right, he rolled the mouse to the left. It was as though the cursor was fixed on the screen and he was sliding the virtual desktop underneath it until the pointer was positioned as he intended -- difficult to visualize, but out-and-out disturbing to witness.

At this point, I realized that George had stopped speaking and was looking at me with a raised eyebrow. He had been narrating his progress through the system's screens and must've reached the problem area while I was lost in mouse-gesture wonderment. I apologized and asked him to repeat his demonstration from the beginning; I couldn't help myself.

When it came time for me to use his computer, I made a pointed dramatic rotation of the mouse, but refrained from mentioning the accepted mouse orientation aloud. When I was finished, I left the mouse upside-up, but as I left the room, I noticed that he had returned it to his preferred position.

Upon hearing my report, a couple of others from the department snuck up to George's floor a few days later to spy on him and his mouse from over top a neighbouring cubicle wall. He was still up (down?) to his inverted tricks, double-thumb-clicking with abandon. We developed the theory that, because his desk was pushed against a wall, the keyboard and mouse cords had been routed over the front edge of his desk to the computer underneath, and that the weight of the cord had pulled his mouse upside-down. Unfamiliar with these newfangled computer doohickeys, George had simply adapted his muscles, joints, and brain to the working environment as he found it.

So George, we salute you, for showing us all that, no matter how mentally and physically contorted we all feel when trying to use computers, it could be much, much worse.