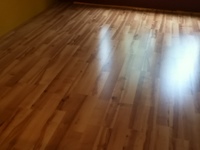 Having already learned to install linoleum, carpet, tile, and decking, I must first admit that it was very wrong to have layered them in that order: carpet should always go on top of the tile, with but a subtle linoleum layer as the finisher. That's the true secret to replicating bouncy castle foot-feel.

This year's never-ending renovation project included a complete resurfacing of the bottom-most portion of the kitchen and living room. This time we chose laminate flooring, a high-pressure sandwich of wood-grain stickers, ballpark peanut shells, and refinery scrapings. Also sandwiches. Together with the look and feel of real wood, you also get the satisfaction of having reallocated a measure of the planet's industrial toxin supply.

We chose a warm and cheerful interpretation of maple, but many other species are available: balsa, Dutch elm, baobab, and something new called OakALike®.

Installing laminate flooring is widely advertised as a novice do-it-yourself-er's weekend project. And that's true. It's also true that a novice won't do nearly as good a job as an experienced floorwright. As evidence, I submit exhibit A, the ground fault circuit interrupter that trips randomly when a certain electrical novice's bathroom fan is turned off.

However, having now completed a full laminate installation with the aid of my able nephew, it is with no little authority that I proclaim the following hard-earned lessons.

As wrong as it seems to actually walk upon a newly finished laminate floor, try your hardest to do so. For the bravest among you, I even encourage a brief victory jig: 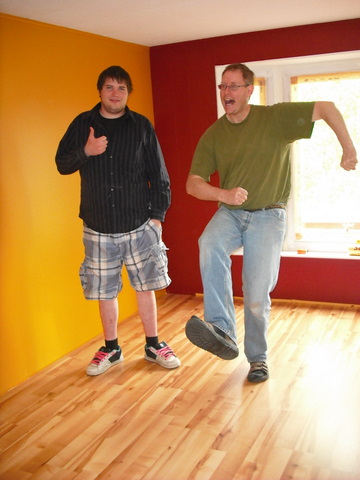 Not every floor installer is as cool as the dude with black socks and sandals.