With every purchase of a house, you get a free couch.

Or at least the one time I bought a house, a decade ago, it came bundled with a couch. The Couch. I found it standing on edge in the kitchen, having been wedged into the ceiling by the moving crew after they realized that no angle, twist, or profanity could manoever The Couch out the door.

After some investigation, it seemed that the previous owner also acquired The Couch via a real estate transaction. The general consensus is that it came in through a window during construction in the Eighties. Either that or it was manufactured in situ.

While not entirely uncomfortable, The Couch was well known among our circle for its posture-skewing carriage. First-time sitters were often swallowed whole. Despite repeated amateur repairs, The Couch's underpinnings had deteriorated past the point of a residential safety inspector's condemnation. 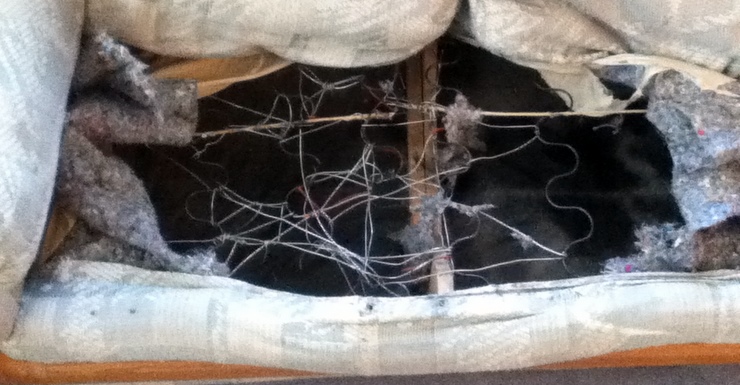 Yet The Couch stayed put, surviving several -- unnecessary, in my opinion -- redecoratings and rearrangings.

The Couch finally met its end yesterday; a victim of long-delayed home renovation. Bent and broken, it was ushered past the threshold with one final, desperate squeeze.

Goodbye, old friend. You -- but not the wiry tines that periodically threatened to puncture my backside -- will be missed.