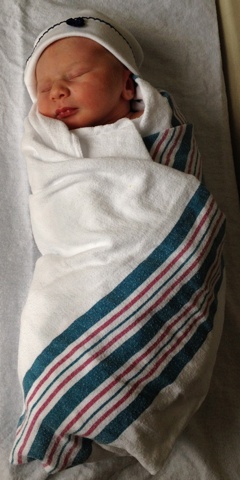 Or, just "Henry-George Dennis Rogers" for the maudit anglos in the audience. He was named Henri after my late father, Denis after his mother's uncle and my step-father, and Georges after Henri.

Of course, none of this would've been possible had henri-georges.com not been available. In that case I would've insisted on "Wilco" so that his phone listing would've been "Rogers, Wilco". There's nothing the early twenty-first century generation will appreciate more than a telephone book gag.

People have been asking what it's like to have a new baby. I say it's about the same as bringing home a turkey-weight PEZ dispenser: cartoonish outsized head, floppy neck, and filled with bricks of delicious Pfefferminz.

Henri-Georges--which has become such a mouthful that some of the family have resorted to "Rijo"--arrived shortly after midnight on June 16th and tipped the scales at a trim 8 pounds and zero ounces*. That corresponds to a rather spindly BMI of just 11.1. Better get you some Weight Gain 4000, Rijo. Beefcake!

*Apparently only babies and lumber are still measured in imperial units. 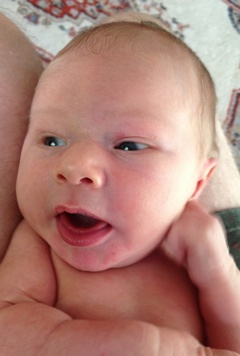 Yet more fodder for the 16th birthday public slide show.

As so many others have commented, the maternity unit at Whitehorse General is truly outstanding. Sadly, I didn't make it through any of the VHS tapes in our room so obviously placed for nervous dads: Slapshot, Rush Hour 2, and part one of LOTR.

In fact, the experience went a long way towards brightening my opinion of hospitals. I no longer solely think of them as gigantic industrial laundry automatons that rely on the leaking juices of the ill to justify their terrible existence.

Even though we received him only once, he came equipped with some forty-three "receiving" blankets. Good thing too, as he squirts through about seventeen of them a day.

I think it's fair to say that his mother and I are more than moderately enthused about our new houseguest. So long as he pays his own way and picks up after himself, there shouldn't be any trouble at all.