Strange the things that appear in old safety deposit boxes. After drilling out one of my father's abandoned boxes, we found a few old Canada Savings Bonds made out in my name, dating from when I was a mere toddler.

I figured I could cash them in and start an education fund for wee Henri-Georges. With compounding interest at today's level of returns, we should be able to comfortably get him through at least his first term at Sal's Refrigerator Repair Academy.

So down to the bank I went with bonds in hand.

Now, you'd think that a bank, what with all the finance-y things they do from 10 to 4, would be able to calculate the maturity value of a Canada Savings Bond. You know, seeing as we're in Canada, and these are not uncommon securities.

The two banks I brought it to, however, puzzled over the certificates for quite a length of time, and only much later phoned me back to report their guesses as to each bond's worth. Two different guesses, as it turned out, and also different--and, crucially, lower--than my own estimate.

Now, while it is true that I undertook a fair chunk of financial training in my previous Bay Street life, I'm not entirely confident in my bond calculation. So, I'm turning it over to you, faithful reader, with a small incentive to make it interesting (No, not one of the bonds. I mean, c'mon. But something north of a cheap bottle of booze and south of a carton of smokes. Choose your vice.)

How much is this Canada Savings Bond worth?

To get you started, I'll include a Government of Canada link to the CSB redemption values for matured, "old style" bonds. If you can find any more information on how to value these bonds, let me know.

Bonus points for something that I can--literally--take to the bank to prove to them what these damned things are worth. 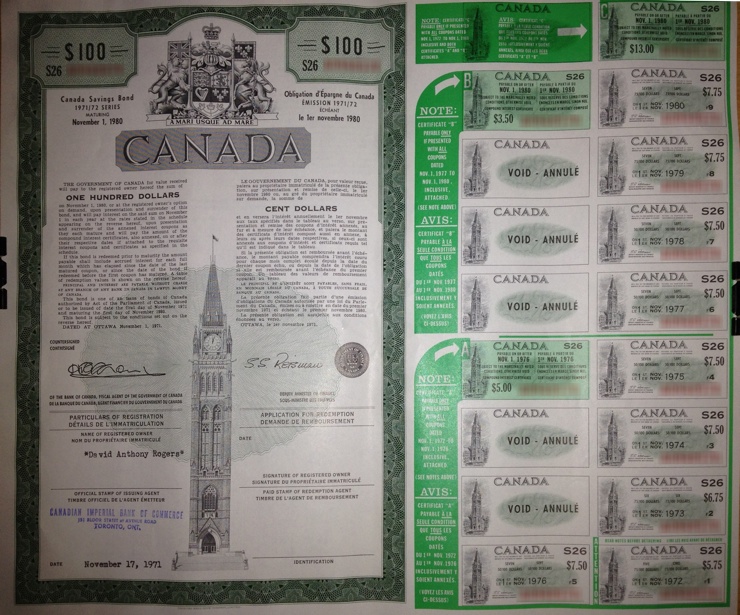 Here's one of the tricky little suckers. Click for an overwhelmingly large version.

The conversation quickly moved to Facebook after Fawn Fritzen passed along my challenge. So far the results are as follows: