It's a good thing I don't hold an electrician ticket. After today, I think it would be revoked, even though I was a mere accessory before the fact.

I began my morning by tripping a power strip's breaker after plugging in our little space heater. Not really thinking through the implications, I moved the heater and plugged it into the Uninterruptable Power Supply (UPS) behind the stereo. A UPS for a stereo is overkill, but at least I haven't had to reset its clock following one of our multiple power outages. After a short burst of warmth from the heater, the UPS replied with its own burst of unpleasant popping noises, and then the unmistakeable smell of blue smoke.

Abandoning the space heater for something with real destructive potential, I began the day-long ignition-of-the-propane-furnace ceremony. Five minutes after it was lit, the furnace screeched to a halt and showered sparks down on the floor from behind one of its panels. "Now is the time to shut off the propane supply to the house," I said to myself.

The culprit was a frayed thirty-year-old wire leading into the furnace blower motor. Of all the things that could go wrong with a propane furnace, that's probably the easiest to repair.

I would also like to add that not a single one of today's electrical mishaps tripped a main breaker. At least the power strip and UPS sacrificed themselves to prevent further damage. But the sparks flying from the metal box containing explosive gas didn't seem the least bit noteworthy to the breaker panel. Crikey. 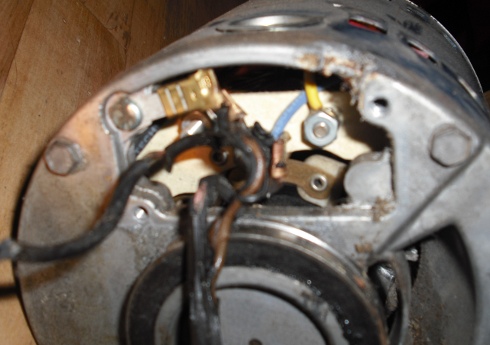 Actual state of thirty-year-old wiring. Makes me wonder how the stuff in the walls is holding up. Short damage is visible at upper-right of motor housing.