...but the rest is really just jazz hands and perpendicular hopping. The real trick of it is not falling in mid thrust on the wet newspaper and rice that has been scattered on the floor by that point. 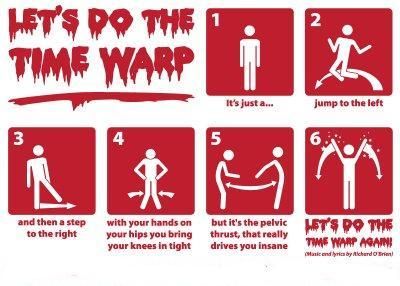 Yes, Carole and I attended last night's screening of The Rocky Horror Picture Show at the Old Firehall. While we didn't dress up -- I'm only fit to play Riff Raff, and I don't wanna be Riff Raff -- Carole insisted on bringing the usual supplies: rice, newspaper, playing cards. The folks putting on the show supplied party hats, confetti, and noise makers. Some brought water guns and toast.

I'd been to a couple of full-on costumed performances back when the movie played for a decade every Saturday at midnight at the old Towne Theatre in Ottawa. I couldn't remember most of the audience lines but belted out the few that I did. A Magenta in the front row seemed to know most of them. Sadly, there were no on-stage performers.

There were the usual risqué and revealing costumes, but the winner certainly deserved his prize: a gentleman in an orange wig with a few extra folds stuffed into bikini briefs and a pink mesh body suit. Not an officially-sanctioned costume, but certainly in keeping with the spirit. Even more impressive was watching him scoot down First Avenue towards his car after the show, still in the same getup.

Of course, were it not for the songs and the audience shenanigans, Rocky Horror would be completely unwatchable. The plot makes no sense whatsoever, and although it's meant to be a sendup of schlocky sci-fi B movies, it's far too interested in its own characters to bother with much in the way of satire. Nevertheless, we'll be back in a year for the next showing with lungs and lines at the ready: