Having spent a combined twelve days in the two countries last month, I am now something of an expert on all matters Asian. This is the first post in a series that, while not all that long, will certainly feel that way. If you prefer pretty pictures, I encourage you to check out Carole's blog as well.

Before leaving for Asia, I was advised by both my brother and the Lonely Planet guides to bring cash, and lots of it. (I weighed both sources about the same, even though my brother has lived in and travelled through Asia for twelve years. If he had used a nicer font in his email, he would've rated more highly as an authority.) Despite their well-advertised lead in electronics manufacture and bowing, the economies of Korea and Japan run on paper currency. Plastic-inspired impulsive debt burden doesn't seem to appeal to those backward peoples.

Note to pickpockets. Target folks headed to those two countries. They'll be the ones sporting wallet bulges and toilet-seat-shaped neck pillows.

Since Whitehorse banks don't stock Yen and Won, convert your loons and toons to good old 'merican greenbacks. Believe it or not, you can also still buy travellers cheques, just as Karl Malden would've wanted.

Once overseas, you can convert back to the local currency, at the airport, larger hotels, and certain unspecified banks. You will lose a hefty percentage in each transaction, and those fees and charges will be carefully explained in poorly-illustrated hangman stick figures at the bottom of your bill. You will also be asked to present your passport, so that your saucer-eyed photo may brighten the day of the money changers. 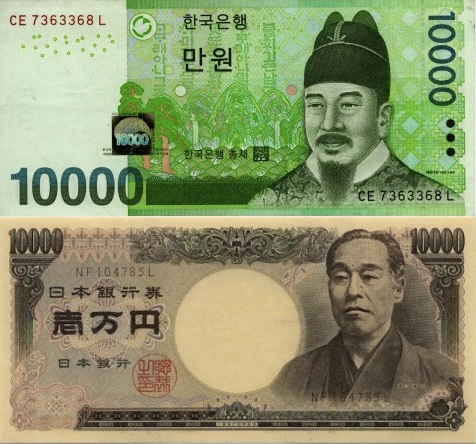 Choose wisely: one will pay for a night out on the town, and the other will buy two fancy coffees the next morning.

You're not likely to accumulate much change during your travels. Neither Korea nor Japan apply a visible sales tax to purchases, and there is no tipping in restaurants. Korean prices tend to round off to the nearest 1000 Won, and Japanese prices round off to the balance of your savings account.

In the next installment of the Guide, I will presumably discuss some other aspect of Korea and Japan. You've been warned.