I first drove into Whitehorse in the early winter of 1999. I parked the car. It didn't start the next morning. A week later I found a job and an apartment. I'm still here.

Early on, I conceived what would become known as the Dog Plan:

By October 2000, I had the truck, having sold my marshmallow-ey '92 Crown Vic to a neighbour from the apartment building. I never saw him or the car again.

By February 2001, I had the house. Not a fancy one, but it had a fenced yard and, since this was before the real estate runup, I could buy it with cash (with generous family assistance).

In October 2001, the Dog Plan came to fruition when this little gal came home from the shelter:

This is what greets you at the gate. Mormons begone!

I named her for the small tuft of white on her chest, "all pepper with a smidgen of salt." Smidgen was likely born in July of 2001, which means today is her tenth birthday. She's snoring away at my feet as I write this, and couldn't give a damn about her decennial. Her recent kennelmate, Minuit, is flaked out down the hall, and there's a third visiting mutt, Hélène, somewhere on the premises. 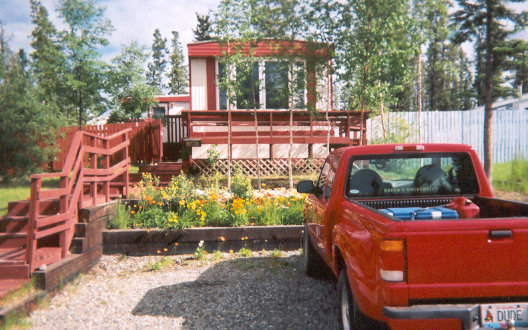 Steps 1 and 2 of the dog plan. From the outside, the structure certainly seems well insulated and leakproof.

So that's the Dog Plan. Carole and I are working on a new plan now.