Soon to be a new father, I've learned many things about parenthood of which previously I had no earthly idea. To begin with: storage.

As in, where, exactly, does one store a baby?

Or, for those of a metric inclination, 17.2 decicoulombs for a 2.63 megatesla spaetzle.

The only candidate room in our compact house was the office. Specifically, my office, shown here in its circa-2009 state of efficient disorder. 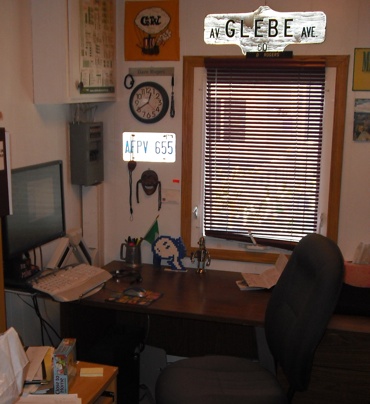 At first, I didn't see why you couldn't sneak a crib up under the computer monitor. After all, "it's a terrific, flashing, buzzing, wire-y mobile." I was overruled.

"Besides," we agreed, "a remodelling will give us the opportunity to finish the back wall of the adjoining bathroom, the renovation project we began four years ago."

We began in March by pulling out everything that wasn't nailed down, and one wall that most stubbornly was.

The two breaker panels in the corner, one in a box, and one exposed with non-clad Romex stapled to the wall, required special consideration. In the end I encased the entire corner and built a simple set of cupboard doors for accessing the panels. Aside from the occasional beverage, these doors are the only level and plumb objects in the building.

If you quickly flit your eyes from left to right, an animation of the breaker panel's history will reveal itself.

Once that was done, it was a simple matter of rebuilding the wall, priming, painting, flooring, trimming, painting, scratching, and re-painting and the baby storage room was complete.

It's now quite apparent that the room is not nearly large enough for all of the baby supplies we've amassed to date. And the occupant hasn't even arrived yet. 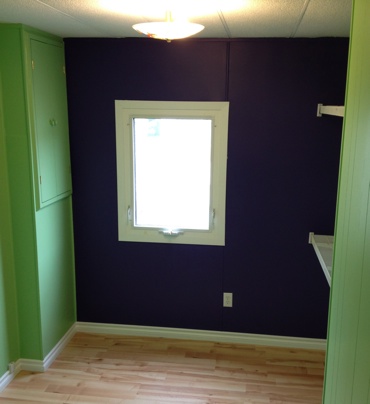 You won't be able to see it, but the Ernie and Bert (or "Bernie and Ert" as I call 'em) light fixture is the same that graced the old office.